I have been working with Golang strings and how to manipulate them. Working from other blogs posts I’ve found. When I sit down to code, I seem to forget everything from the previous session. This post is to be a cheat sheet for myself on string manipulation.

References Can be found here

FILE with data being used

To give a practical application to this post, I have included a rudimentary SSH auth log I found from the internet (googles). I have repeated lines and changed data so it could be manipulated more.

So first off we need data to play with.
We could work with a simple string like:

But that is no fun.

So this is how to open a file & check for errors:

If the file is open, we will now want to read the file.

Use the scanner package:

Package scanner provides a scanner and tokenizer for UTF-8-encoded text. It takes an io.Reader providing the source, which then can be tokenized through repeated calls to the Scan function. For compatibility with existing tools, the NUL character is not allowed.

In short: it scans UTF-8-encoded text

Reading line by line + Adding to an array

Generally the data needs to be stored into a variable so that it can be manipulated. Create a string slice to place the data in, then loop through each line.

scanner.Scan() holds the Boolean of true or false if there is text scanner.Text() holds the data we want to manipulate

Create a string slice to place the data in, then loop through each line of Scanner.Text()

Code up to this point:

What has been done so far

Finding a value in string

To search through a string for a value, the strings.Contains() function is used.

scanner.Text(), "word" is how the syntax would be for using the Scan.

Since we have data in a slice, we will have to loop through it.

Example slice, which we loop through to test if string is in a string.

To print the line, an IF ELSE statement can be used:

Using testSlice from before, but looping through it

The Go Playground code The output for this is below: 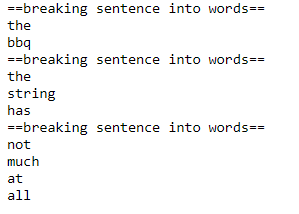 Separating by a delimiter

I definitely had to research this.

To separate by something other than a space, use the strings.FieldFunc(). Which comes in the format of func FieldsFunc(s string, f func(rune) bool) []string

The example given is from:

So cutting a comma from testSlice:= "the bbq, the string has, not much at all" would look like:

Separate by 2 delimiters (or more)

The process is the same as one delimiter that is not space, you just add an OR statement with the 2nd delimiter.

To do this via the command line you would do:

Hope this helps with parsing strings.

TL;DR Using short-lived secrets to access a database is much more secure than standard credentials

I recently received my AWS Solutions Architect Associate Cert, and I inadvertently learned more about Ops and DevOps in respect to automation, deployment an...

Connect to Splunk with Python

I have been working on Windows and needed to connect to a Network Interface (NIC). I ran into problems, here is what I learned and hope it saves the same tro...

I have been using tcpdump recently and wanted to note down some of the commands Y’know, for future reference.

Today I was trouble shooting a machine at work. I did not have access via RDP or VNC, so I used SSH to forward my traffic to the host so I could access a URL.

I participated in a DevSecOps type workshop on Saturday (May 9th) in which we created some GitHub Actions. This is a post to solidify the learning and be a c...

This post is a cheat sheet for removing values from a Slice (technically creating a new slice).

On April 25th I was fortunate enough to participate in the Trend Micro Threat Defense workshop.

Since I blogged about my experience at OpenSoc, I wanted to expand on the value I found in my eLearnSecuirty Incident Response course. What you will find bel...

I have been working with Golang strings and how to manipulate them. Working from other blogs posts I’ve found. When I sit down to code, I seem to forget ever...

You’ll find this post in your _posts directory. Go ahead and edit it and re-build the site to see your changes. You can rebuild the site in many different wa...

This is from my Home PC